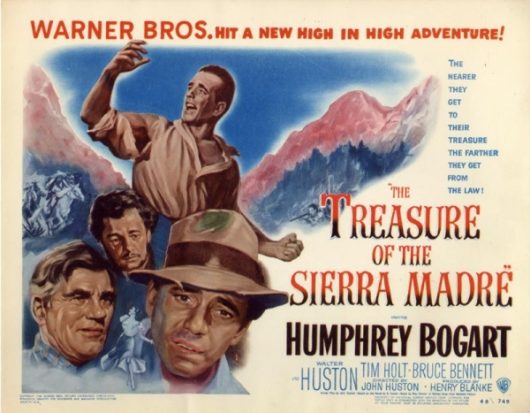 One of my favorite movies has always been “Treasure of Sierra Madre“.  There’s a nice moment in the film when three miners who’ve struck gold are about to come down off the mountain. They’ve staked their claim and are leaving with a small fortune they’ve pried from the rocky terrain. One of the three, a crusty old charmer named Howard (played by Walter Huston) insists they restore the mountain and close the wound they’ve ripped in her side. The… Read More

Character, Hanging In There, Inspiration

If you’re not hopeful and optimistic, then you just give up. You have to take the long hard look and just believe that if you’re consistent, you will succeed.

Stay afraid, but do it anyway. What’s important is the action. You don’t have to wait to be confident. Just do it and eventually the confidence will follow

It is the beginning of wisdom when you recognize that the best you can do is choose which rules you want to live by, and it’s persistent and aggravated imbecility to pretend you can live without any.

In the end we are always rewarded for our good will, our patience, fair-mindedness, and gentleness with what is strange.

Leave your pride, ego, and narcissism somewhere else. Reactions from those parts of you will reinforce your children’s most primitive fears.

if you want to live an authentic, meaningful life, you need to master the art of disappointing and upsetting others, hurting feelings, and living with the reality that some people just won’t like you. It may not be easy, but it’s essential if you want your life to reflect your deepest desires, values, and needs.

When someone would mistreat, misinform, misuse, misguide, mishandle, mislead… or any other “mis”… to others, they’re obviously missing something from their lives.