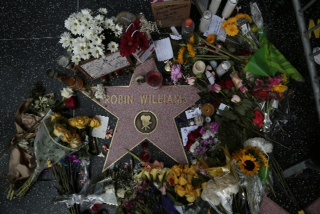 When I heard that Robin Williams had died by his own hand I thought of a favorite song.  Don McLean’s beautiful Vincent has a line that has haunted me for years.

“And on that starry, starry night, when no hope was left in sight,

you took your life as lovers often do

I could have told you Vincent,  this world was never meant

for one as beautiful as you.”

It makes me want to cry.  It always will.  It’s hard to think of someone who gave us so much joy, living with and dying from such heartache.   It’s devastating to think of Vincent Van Gogh or Robin Williams or my songwriter friend Phil Ochs sitting with pain so severe that there seemed to be only one avenue of escape.  All three committed suicide.

I know their work. Their art.  I know their success.  I have almost no real knowledge of their personal lives or the intensity of their pain.

Still, today I’m left with the flat taste of helplessness and loss like so many of you who also loved Robin for his gifts.  Decades of hilarity and pathos left us feeling as if we’d lost someone very close.  The illusion of intimacy.

Robin and I crossed paths a few times.  I loved his work but sadly never told him so.  Probably ego at work.  Not wanting to be seen as a fan, but as a contemporary.   I handle such meetings differently now.  I’m perfectly comfortable dishing up praise to people I admire.  Being a fan, staying a fan makes for some wonderful encounters.

Robin and I had Jonathan Winters in common.  We spoke of him the first time we met. I’d worked with Jonathan on “The Loved One”, my first film, and followed him around like a puppy.  Robin had a longer and deeper connection to Jonathan.  I would think he was something of a mentor to Robin and clearly a great inspiration.  I’m told Robin visited him often during his last years. That says a great deal about the wealth of kindness that sprang from his heart.  They say Robin Williams would go anywhere for sick children, for the troops, for anyone who asked for a dose of his healing humor.  What a lovely way to be remembered.

I cannot imagine the intensity of this tragedy for his family and close friends.  My prayers are for them and for his children.  Especially his children.  For the rest of us I suppose the task is to find a lesson in the midst of the loss.

For me it’s one thought.  Do not postpone kindness or generosity.  Give the world your best now, before the chance to give has gone.

I won’t speculate on the chemistry of depression.  I did wonder if the medications prescribed for Parkinson’s disease acerbate mood disorder.  Is that something medicine needs to look at? I know that he was sober for many years and that most of us drank and used drugs to self medicate our loneliness, fear, abandonment issues, feelings of being unworthy of our success, anger at life’s sometimes nasty beginnings.  Was depression always there?  Pools of sorrow at the headwaters of his alcoholism?

His take on being an alcoholic is one of the funniest, most insightful and honest bits of brilliance I’ve ever witnessed.  Thanks to Tracey for posting it last week.  Alcoholics were to Robin “God’s rodeo clowns” …  doing the most dangerous and demented things when loaded.   And cocaine, generously sprinkled on both of our stories, he called “The Devils Dandruff.”   My God, what a marvelous mind we’ve lost.

I ran on the bay at Sag Harbor the morning after Robin’s death and as I watched the rising sun reflected as dancing jewels on the water I thought, “Robin, you missed this.  You missed August 13th and the rest of the year.  The changing of the seasons and the games, gaffs, giggles.  You spawned so many giggle fits.  You deserved the same sweet laughter you brought us.  You deserved decades more of everything.

Yes, the trail of depression and childhood trauma has lead many into full-blown addiction. It’s a miracle that so many of us have found our way out of that darkness and into the light of what I know to be an easier, softer way.  I’ve found a better way of living in love and service, gratitude and trust.  I wish you’d been as lucky.

I will always remember you as a comic genius, a really fine actor and especially as a fellow addict who reduced the stigma of our disease with your openness, your willingness to reveal your battles and the victory in decades of sober choices.  You gave and gave until evidently there wasn’t enough left to handle even another day.

I found so much truth in Tracey’s blog.  She speaks of the demons that wrestled your last breath away.  She’s right. For some they are relentless and apparently unbearable.

“For they could not love you

But still your love was true

And when no hope was left in sight

On that starry, starry night

You took your life as lovers often do

I could have told you, Robin

This world was never meant for one

as beautiful as you.”

Thank you sir, for all you gave. God speed. May you find peace at last.  You will be missed.