Show summary: Paul Williams and author Tracey Jackson are in studio, and Adam talks with them about the importance of Gratitude. They also discuss Paul’s legendary career, as well as his struggles with substance abuse over the years. Later, Tracey and Paul help Adam analyze his relationships with people like Ray and his mom. As the show wraps up, Adam gives advice on how to make quicker decisions.

Listen to The Adam Carolla Show

Williams and Jackson recently sat down with SiriusXM host Ron Bennington on the Ron and Fez Show on Raw Dog Comedy Hits 99 to talk about the book, designed to be the first recovery book for non-addicts.

Listen below or on theinterrobang.com 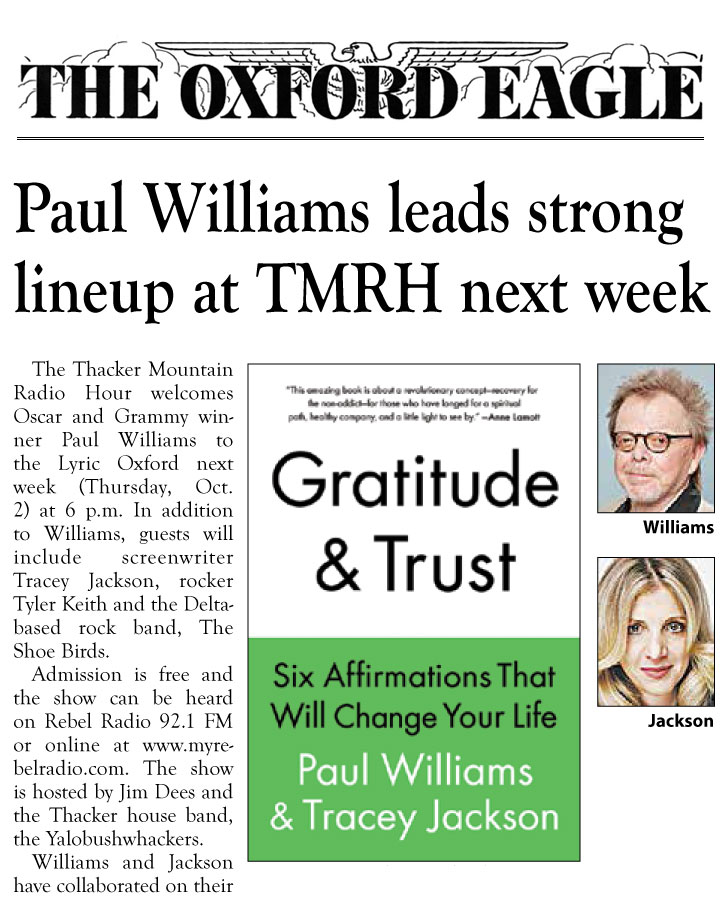 The Thacker Mountain Radio Hour welcomes Oscar and Grammy winner Paul Williams to the Lyric Oxford next week (Thursday, Oct. 2) at 6 p.m. In addition to Williams, guests will include screenwriter Tracey Jackson, rocker Tyler Keith and the Delta-based rock band, The Shoe Birds.

Admission is free and the show can be heard on Rebel Radio 92.1 FM or online at www.rebelradio.com. The show is hosted ny Jim Dees and the Thacker house band, the Yalobushwackers.

Writing the Book on Gratitude and Trust

Paul Williams and Tracey Jackson collaborate on new book that uses the principles of the recovery movement to help just about anybody.

Longtime friends—the pair first met in Robert Mitchum‘s bedroom in 1982—Paul Williams (yes, that Paul Williams, the Oscar-, Grammy- and Golden Globe-winning Hall of Fame songwriter) and Tracey Jackson (who write the films Confessions of a Shopaholic and The Guru, among others) had talked about doing a project together for years before inspiration finally struck.

Read the article at sbseasons.com

Gratitude and Trust is a groundbreaking self-help book that applies classic recovery principles to help non-addicts find contentment and happiness. Paul Williams and Tracey Jackson have designed a new, positive program, based on a half-dozen affirmations, that can help you conquer your voices, address personal dysfunctions, and start to brighten your darkest moods.

Read an excerpt from Chapter 1 on booksforbetterliving.com 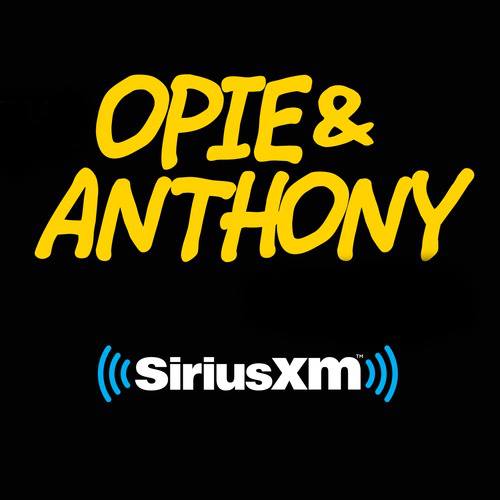 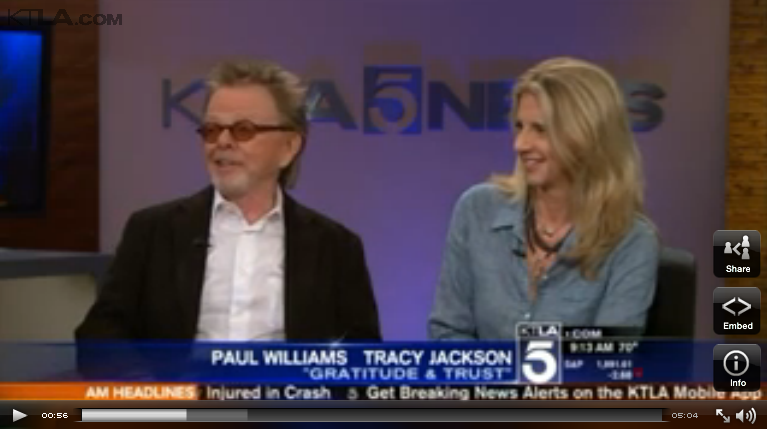 Oscar- and Grammy-winning songwriter Paul Williams is an alcoholic. Successful screenwriter and author Tracey Jackson is not. Together, these two close friends have written GRATITUDE AND TRUST: Six Affirmations That Will Change Your Life.

Watch the video at ktla.com 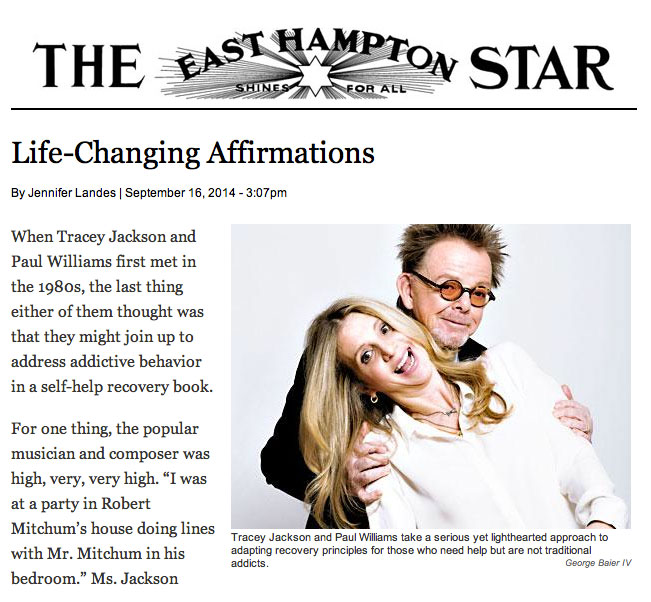 When Tracey Jackson and Paul Williams first met in the 1980s, the last thing either of them thought was that they might join up to address addictive behavior in a self-help recovery book.

For one thing, the popular musician and composer was high, very, very high. “I was at a party in Robert Mitchum’s house doing lines with Mr. Mitchum in his bedroom.” Ms. Jackson came in and complimented Mr. Williams on a recent film. His impaired retort was such that he said, “She went into the bedroom a fan of Paul Williams and came out a fan of Neil Diamond.”

Read the full article at easthamptonstar.com

With his stature, wit, blond bowl cut, wide lapels, and oversize glasses, legendary songwriter Paul Williams (“Rainy Days and Mondays,” “We’ve Only Just Begun,” and maybe most indelibly, “The Rainbow Connection”) cut an unforgettable show-business figure in the 1970s. He made more than 48 appearances on The Tonight Show with Johnny Carson—he claims to remember only six—and acted in zeitgeist films such as Battle for the Planet of the Apes, Smokey and the Bandit, and The Muppet Movie. Then, in the 80s, he vanished.

Read the full interview at VanityFair.com

No One Is Alone: Affirmations for Life Change 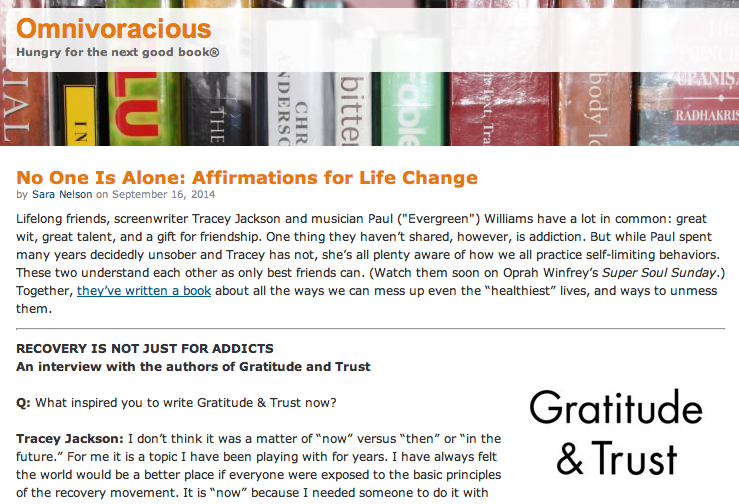 Lifelong friends, screenwriter Tracey Jackson and musician Paul (“Evergreen”) Williams have a lot in common: great wit, great talent, and a gift for friendship. One thing they haven’t shared, however, is addiction. But while Paul spent many years decidedly unsober and Tracey has not, she’s all plenty aware of how we all practice self-limiting behaviors. These two understand each other as only best friends can. (Watch them soon on Oprah Winfrey’s Super Soul Sunday.) Together, they’ve written a book about all the ways we can mess up even the “healthiest” lives, and ways to unmess them.

Read the interview at omnivoracious.com