Raise Your Glasses to These Sparkling Reads Chosen by the DailyMail

A well-chosen book is the perfect present – so from now until Christmas the DailyMail will be bringing you a weekly selection of the year’s best titles.

The Mail’s columnists launch the festivities by revealing what they’ve most enjoyed reading this year, including Gratitude & Trust!

Read the article at dailymail.co.uk 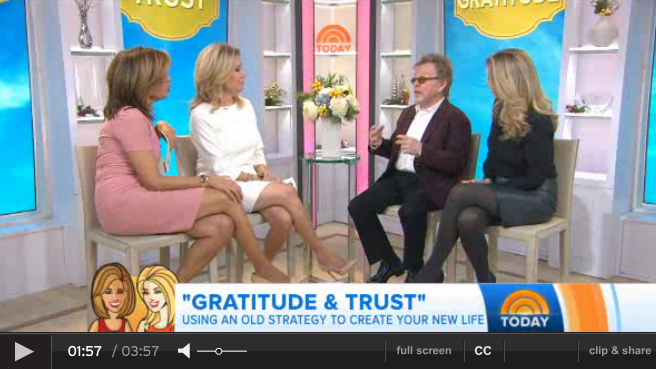 Tracey and Paul recently appeared on The Today Show with Kathie Lee and Hoda to discuss their book, Gratitude & Trust.

Watch the video below or at today.com

Oprah sits down with Oscar®- and Grammy®-winning songwriter Paul Williams and screenwriter Tracey Jackson, authors of the new book Gratitude and Trust, in which they discuss how recovery is not just for addicts.

Watch the full episode below or at Oprah.com 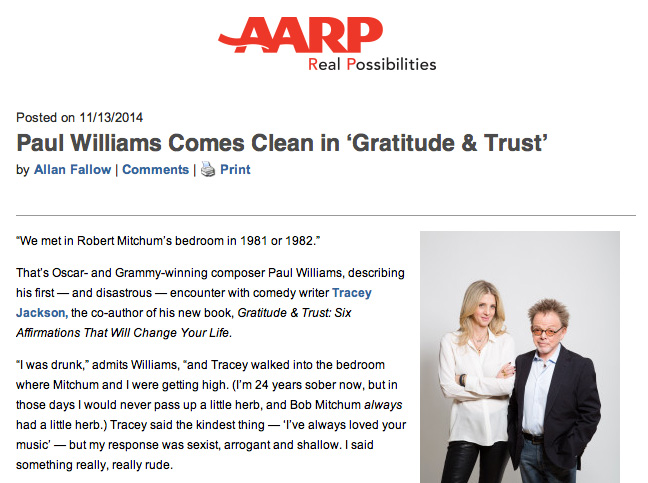 That’s Oscar- and Grammy-winning composer Paul Williams, describing his first — and disastrous — encounter with comedy writer Tracey Jackson, the co-author of his new book, Gratitude & Trust: Six Affirmations That Will Change Your Life.

“I was drunk,” admits Williams, “and Tracey walked into the bedroom where Mitchum and I were getting high. (I’m 24 years sober now, but in those days I would never pass up a little herb, and Bob Mitchum alwayshad a little herb.) Tracey said the kindest thing — ‘I’ve always loved your music’ — but my response was sexist, arrogant and shallow. I said something really, really rude.

“She spun on her heels and walked out of that room a huge Neil Diamond fan.”

The next time they met, Williams was clean and sober — and the encounter was considerably less fraught: “Tracey came to see me perform in 2001 at Feinstein’s [in San Francisco’s Hotel Nikko] with her husband, Glenn,” recalls Williams, “and we became great friends.”

Read the full article at AARP.org

Paul Williams and Tracey Jackson on The Peter Boyles Show

Paul and Tracey recently appeared on the The Peter Boyles Show on 710 KNUS in Colorado.

Tracey Jackson and Paul Williams on the Chad Benson Show

Legendary singer-songwriter Paul Williams stops by with Tracey Jackson to discuss their latest collaboration, a book entitled “Gratitude & Trust: Six Affirmations That Will Change Your Life”.

“Chad Thomas” Benson is an accomplished talk Show Host, voice over, production and commercial talent boasting over 22 years experience in the entertainment industry. A truly unique voice on talk radio that is hard charging,real,edgy and most importantly entertaining.

Listen below or click here to listen to the podcast in iTunes. 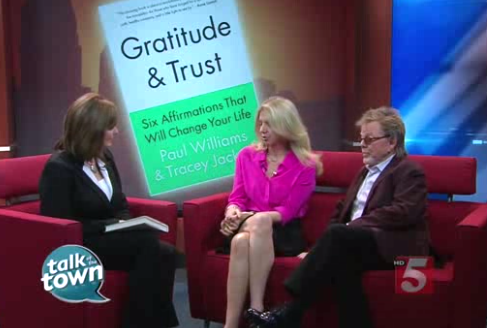 Talk of the Town features some of the most famous and current best-selling authors.

Every week Kathie Lee Gifford will be joined by an eclectic group of friends from the world of TV, film, music, sports and news. In the latest episode, Kathie Lee welcomes Oscar/Emmy award winning Singer-Songwriter Paul Williams along with his current co-author and screenwriter Tracey Jackson to talk about the power of gratitude.

Click here to listen to the Kathie Lee Gifford podcast. 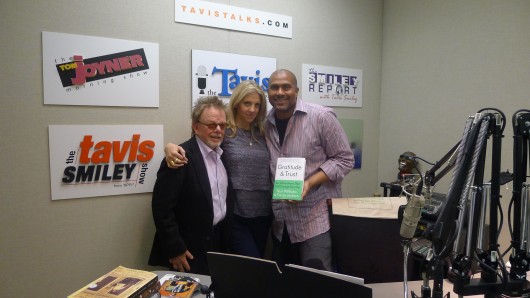 Songwriter Paul Williams brought pleasure to millions with hits including “Evergreen” and “We’ve Only Just Begun”. Despite his wild success, he battled alcoholism and drug abuse. His friend, screenwriter Tracey Jackson, also fought addictions – to cigarettes, overspending, bad relationships and catastrophic thinking. Their experiences in recovery are the basis of a new book, “Gratitude & Trust: Six Affirmations That Will Change Your Life”, and they visited our studios to share their stories.

Listen below or on tavissmileyradio.com