WITH GRATITUDE AND TRUST EVERY DAY CAN BE NEW YEARS! 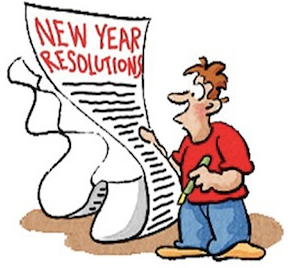 Many have been over eating, over drinking, over spending, under exercising, generally engorging themselves on life with the idea that come January 1st (that would be today) they will put an immediate end to it all. They will do this by merely invoking their New Year’s resolutions.

My family is usually away for New Years. We have a quiet, low-key dinner on the early side, and most years are asleep by 12:30. We have one tradition.   We make no resolutions.

You see, I have a big problem with resolutions.  They are for the most part unattainable. By turning one page of the calendar you cannot break firmly engrained bad habits.

Realistically you cannot vow to start going to the gym five days a week when historically you have gone once or twice then stopped.

Little known fact, but makes total sense, more people sign up for gym memberships during the month of January than any other time. Of course they do, for a brief moment, they are following through on their well – meaning resolutions. But by the end of February most people who signed up stop going all together, another hunk show up once every few weeks.  The rest are MIA by March.

The basis of the recovery movement is a day at a time.  Paul and I have an affirmation, I’m not giving away, but it deals with each day we have the chance to examine and amend our behavior.

What works about this principle is if you slip up, it’s one day.  You are not falling off a giant wagon that you have declared will carry you for 365 days.

As we all know bad habits, old habits, all habits are hard to break.  They require daily vigilance and diligence if we want to change them.

And if you fall back into old ways, as we all do; if you take a piece of pizza when you have sworn off carbs. Or snuck a Marlboro Light when you promised to quit smoking; or if you took out that over used Visa for a purchase you vowed you would not make until your daughter’s birthday in five months; well, you are merely human.

But human nature, being human what we tend to do is go, “Oh well, I’ve botched the whole thing up now” and what can be taken as a momentary, singular tear in a resolution (if we must use that word) becomes a direct pathway right back to the old habits.

The Visa remains in use. The one cigarette gets turned into a pack and then another, until you’re right back to a pack a day. The pizza is followed by dessert and well what the hell, I will start the diet next week.  Which often turns into next year, which translates into never.  The single day you missed working out, is suddenly four, then four weeks, then WTF – why bother?

The advantage of a day at a time is you just say, OK, I’m not ruining a year with this one incident.  I’m not undoing my whole new lifestyle.

I’m not stacking the deck totally against personal progress.  I’m making it doable and by doing that, doable becomes the controlling dynamic.

I’m very disciplined about working out.  I have just missed five days due to being away. I don’t take this as a failure on my part or me letting myself down, tomorrow I will be right back in the gym. It was a momentary break in my schedule.

Habits are easy to return to once they are habits, and that works both ways, good habits and bad habits. If you get in the habit of taking care of yourself, eating well, working out, not over spending, whatever your Achilles heel might be it will be much easier to return to it even if there is a slip up.

But you can realistically only create those habits if you take it a day at a time.  If you set yourself up by saying,  “I will never eat another carb until June.”  Well, that is not possible. Not for me.  I say I try not to eat too many carbs. That is as good as I can do. I know will eat them, but I don’t set myself up to fail. If I’ve had more on one day than normal, I say tomorrow I cut way back, maybe tomorrow I have none.  The day after I will see what happens.   And it’s the way I live my life. Some days are better than others.  If I said December 31st,   “I am totally off carbs”, and by January 2nd I was at IHOP, it would likely be another year before I made that declaration. I would probably spend too much time at IHOP.

But we are also realistic.  And we know to live that way mandates a day at a time approach.

We are grateful we wake up each morning, not just January 1st with a clean slate. Whatever has gone on the day before is history and we have a whole new 24 hours to start again.  And once those 24 hours start building, they become days and weeks and months.  And then it’s January 31st again and you are in a much better place than you were the year before. And it didn’t happen because you resolved to never do anything again, but because you made the choice to live in gratitude and trust and live your life one day at a time.

You trust you will do the right thing and if you don’t you are grateful every day is a new slate. Ipso facto –  if you live in gratitude and trust every day is January 1st.