You may have read the title of this post and thought that I was going dyslexic. I’m not, I assure you. I know that the Greek symbols are usually read “Alpha and Omega” meaning “the beginning and end”. It’s a recurring symbol in religious life that represents spirituality and eternity. If you’ve been obligated to take (or know someone who has taken) the Camino Portuguese Route pilgrimage, you would know about the final attraction. At the end of the 383 mile journey, all on foot, the travelers find themselves at the Cathedral of Santiago where unmistakably displayed are the well-known symbols reversed; OMEGA & ALPHA. One of the reasons this is done is to symbolize the end of the physical journey and the beginning of spiritual awakening.

But why can we not employ this idea to the mind and body as well? Is it possible? I have found this very thing happening to myself since the discovery of “Gratitude And Trust”. Here’s my “OMEGA & ALPHA”:

MY MIND: Before “Gratitude And Trust” I allowed negative thinking run amuck in my head. Allowing the positive affirmations and stories from all walks of life deepened my outlook and I discovered things about myself that were hidden, lost or plainly not known. I want to give credit to every single person who has blogged or followed the G&T site. Your insights and suggestions have made up a support group of those that can find worth in sharing their short-comings, discoveries and life lessons. You have helped put an END to “Pessimistic Steppie” and co-operated in the formation and the BEGINNING life of “Optimistic Steppie”. I take each writing and affirmation and make it a daily mantra.
I applaud you all!

MY BODY: For the years following the 18 wheeler accident, I allowed the pain from my injuries make the decisions of whether to exercise or not. Relief was so much easier to obtain with the use of ice packs and medications rather than with physical therapy. I had a love affair with NUMBNESS! My condition worsened. Medication doses increased. Ice wasn’t enough. My desperation grew. My doctors suggested physical rehab. Having discovered progressive nerve damage, physical rehab suggested ice packs and stronger medications. I cried. Such pain and disappointment had me running to comfort food full of sugar, salt and fat.

“Something has to change…and it’s probably me”

That affirmation changed my life in a dramatic way! That was my OMEGA. It was the END of allowing my body to break down. It was the END of strong medications. It was the END of fatty foods. It was the BEGINNING of what I call “Steppie See: Steppie Do”. Turning to the co-founders of “Gratitude And Trust” I took ideas for exercise and nutrition (from the G&T site and Twitter) and modified them to fit my personal life-style.

Paul Williams (Motivator, Sober-Sensei)
A great place to start is with someone who is NOT an athlete. Paul does something simple. He jogs. I love that idea.. But jogging outside would put pressure on my joints and injuries. I BEGUN (there’s an ALPHA) jogging on a mini trampoline. He is also the best advocate for addicts and can talk a great deal about the dangers of drugs. I was inspired to BEGIN backing off the strong medications. I know I will never be fully off of them but I am taking far less than I was before.
Numbness and I broke up.

Tracey Jackson (Queen of Will-Power, Fitness Guru).
This woman travels the world, eating cultural delicacies and doesn’t gain an ounce! She doesn’t seem to allow herself to over-eat. She visited a Cafe’ Du Monde in New Orleans and turned down beignets. I live in New Orleans. Beignets along with po’-boys, snowballs and king cake are commonplace, and my will power…. well not so much. I was inspired to END the indulging and BEGIN a diet that consists of salad, fruit, yogurt, and a stronger will-power. Tracey also exercises. When weight loss and gained-energy from trampoline jogging and healthier eating started to manifest, I started to seek more workouts. Along with the mini trampoline, I’ve taken up yoga and pilates.
I will not be outdone by a NIKE WRIST BAND!

I have lost over 50 pounds! But I dropping a lot more than weight. Every day I have less fear, doubt, anger, depression and the so popular selfish-misery. Although I still have my bad days and a disability that will be with me for the rest of this life, I now face it with a whole new mindset. 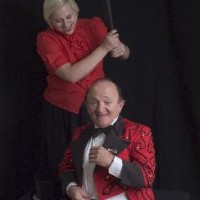 Stephanie “Steppie” Royes is a survivor; dealing with challenges from an 18 wheeler accident to going though Hurricane Katrina/Rita, Gustav & Issac and everything in-between. She makes a living as an entertainer (face-painting clown, party games, magician’s assistant and tarot card reader) and when given the chance she does background extra work in the movies. A lot of her time is spent volunteering at the Audubon Zoo and pursuing hobbies such as searching for extraterrestrial life in our universe and working with arts and crafts. She lives in Metairie Louisiana with her husband Irwin -The World’s Smallest Magician.