My Dad wasn’t great at paying child support (he resented the $280 a month). I wound up spending most of my life trying to prove to my Dad that I was worth the money. My father had a MSW and made a very comfortable living. He drove new cars and built two brand new houses. My mother and I drove used cars, wore clothes from the thrift store and counted our pennies. In some ways I am still trying to prove to him that I was worth having and that he should have loved me more and wanted more for me. I don’t know how a person ever moves on from that. When your own Dad puts money before you it’s hard to figure out what you are worth.

I grew up looking at Playboy. My father always left them on the bathroom floor. I’ve been preoccupied with looking sexy and perfect since I was five. I have submitted to Playboy more times than I can count. I thought somehow that would make me the girl my father thought was interesting and could capture his attention. He spent hours in that bathroom looking at those magazines. Maybe I could have his complete attention too. I aspired to be objectified.

I remember my Dad asking me when I was 16 if I was having sex with my boyfriend. This was after the boyfriend and I had been going out for six months and he had given me a bracelet that probably cost $50. I said no. My Dad said, “Well, he’s an awfully good boyfriend then.” Every time a boyfriend didn’t love me back, every time somebody didn’t help me in a store or ignored me, I felt the exact same feeling as my father not being there to protect me. I didn’t deserve someone respecting me or treating me well unless I was making myself “useful” to them.

As a kid I think I knew my Dad was completely unavailable (in every way). Inside me somewhere I had this idea of what a Dad should be. Because of this idea I was sure that he loved me as much as I loved him. Why wouldn’t he? That was what dads did. Right? They love you more than anything. They protect you. They provide for you. They make do everything they can to make sure you know that you are important. That you live in a world where you matter and are cherished. Right? But what if the definition of a Dad was one where he felt like he had to be a father but he didn’t really want to be one? That happens. It happened to me.

My Dad made things fun when I saw him. He went through the motions of hugging me or helping me with a school paper when I would fly down to Florida for Christmas break. But in the end he couldn’t fake it any longer. He only wanted to be the fun-dad not the serious-stuff-dad. He wasn’t actually interested in me as his daughter – as someone who depended on him. Someone who desperately needed him in difficult times. I was the cell phone plan that he couldn’t get out of. Ignoring it didn’t make it go away. It just made the cell phone plan quit eating, drink too much and have sex with a lot of men that didn’t appreciate having a really great cell phone plan. I spent my time trying to figure out how to be cute enough, sweet enough, sexy enough, smart enough to get my needs met by boys and eventually men. All because my father never made that grand gesture to come to my rescue and tell me that I was good enough and deserved good things even if I wasn’t perfect.

In high school I once grounded myself because my father wouldn’t. I had dented his car pulling out of our driveway. My father was pissed. Very pissed. He called me a “spoiled bitch.” I felt I had done something terrible and I was so sorry I had damaged his vehicle. He humiliated me but didn’t punish me. He didn’t care enough to do that. I knew I didn’t deserve to go out that weekend so I grounded myself. My therapist says she’s heard everything and that a person grounding themselves is a first. I can’t help but feel as though I have accomplished something very special. Where is my Guinness Book Of World Records mention? Could someone let them know about this achievement?

If I dressed up, my father would pat me on the ass and tell me I cleaned up nice. He would give me an extra 20 bucks for getting a 4.0. He was not the kind of father that showed up for an out of state high school graduation (graduating at the top 10% of her class) or after a near death car accident. And I don’t mean not show up in 24 hours or 48 hours or 72 hours. He didn’t show up a month later or even six months later. His wife did send a book and a stuffed animal and a card. So that counts for something. Somewhere . I guess.

The self-talk of how I wasn’t good enough meant that I was susceptible to being degraded, humiliated, and walked on by men and women. My friendships were often one sided. More than one friend has stolen money from me, slept with my boyfriend, and lied to me. And I wondered what I did wrong. Why didn’t they like me more? Why wasn’t I someone they wanted to be nice to? I didn’t wonder what was wrong with them.

I have been botoxing since I was 24. I want to freeze TIME not wrinkles. I fear that if I get older I will actually be too old and it will be too late for a “do over.” If my Dad comes back and says, “I’m sorry” we can’t go back in time and start where we left off if I’m not young. If I can stay looking 24 (who am I kidding but I can try) then maybe I will never be a 35 year old, 45 year old or 55 year old whose father didn’t understand or didn’t care what I needed. 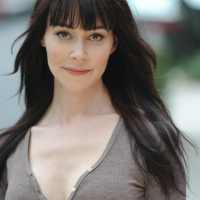 Actress, comic, writer, hand model, and humor columnist for The Rockland County Times, contestant on Season 10 of America’s Got Talent (sort of), cover of Time Magazine Oct. 12 2015 issue, Tracy in the new HBO series Vinyl. You’ve seen her on Celebrity Ghost Stories, she was the ghost. Before acting and comedy Ms. Steinbeck worked as a disgruntled and angry hairstylist to the rich and famous. She also worked on a pig farm…breeding. You can find her on Facebook https://www.facebook.com/EllaSteinbeck or on her website www.ellasteinbeck.com