IN ONE EAR AND OUT THE OTHER? 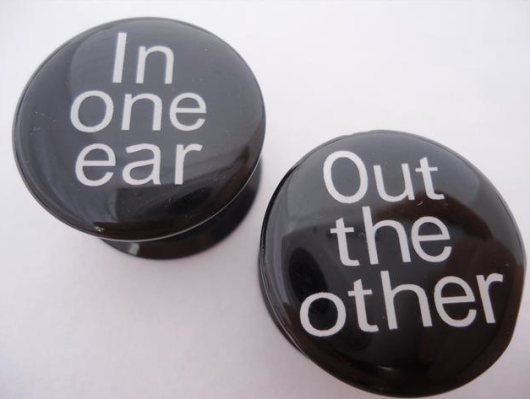 It’s an expression we hear all the time.  It usually has a “Don’t let it bother you” tacked on at the beginning or the end.

You know, “Don’t let it bother you. In one ear and out the other.”

The problem I have with this philosophy is not the letting go part. It’s not the not holding on to grudges, making more of what people say than perhaps they mean, attaching an importance to silly, hurtful or just lame statements that come flying out of the mouths of the unthinking, in a way much of that should, perhaps, go in one ear and out the other.

But I think one needs to stop the message somewhere between the two lobes before just shooing out into the ether. Because truth is, without examining what you are tossing out, you don’t really know what it is.

There is a place between hearing it and letting it go, where one should examine what is being said and by whom. And then if on inspection it deserves to be hurried through the hearing canals and flushed out the other side – do it quickly.

But there are many things that we hear, and supposedly discard of that get stuck.  They don’t necessarily just glide on through our ear canals.  They often get lodged in our throats.  You know that lump in the throat?  It comes from somewhere; sometimes a purposely hurtful remark that didn’t quite make it out the other ear.

We do hear all sorts of messages that may not always be what someone is saying.

If we have a history of being verbally abused by a parent or relative, that stays with us. It colors much of the way we hear what everyone is saying all the time.

So much so that someone can say something off the cuff, that has nothing to do with us, or isn’t really directed at us, but because of our past, because of a possibly dented self-image, we might hear it as direct assault.

If we take the in one ear and out the other approach, that feeling will likely get jammed somewhere.

Feelings that are unexamined or unexpressed, feelings that get shoved to the side, in one ear and out the other, find their way to another spot. The stomach.  The lungs.  The back. The heart.

We carry the hurt with us and it either hurts us or we may take it out on others.

But feelings or responses that are held to the light and examined, can often be experienced and then filed away where they belong.

So the offensive remark the boss made, to be funny and glib and perhaps impress the pretty new V,P., you could take to be directed at you in some derogatory fashion. It sounded like the same kind of remark your dad used to make after he had a few too many.  The remarks that sent you to your room wondering, what is wrong with me? Why can’t I fix it? It must be my fault.

If you let this thoughtless remark by the boss go in one ear and out the other, without taking the time to understand, that A) he was in fact just trying to impress the new girl at the office. B) he is a rather tasteless guy to begin with and seldom thinks about what he says.  C) he is clueless to your particular past and would never think you might take it personally D) if you know yourself well enough you realize you are playing an old tape. Dancing to an old tune. Auto-responding to things that happened in your past, that have no real place in your present.

If you stop the sound waves in your brain, in that spot between your ears, and you make sense of what they mean to others and to you, you can then, if appropriate, send them on out the other side.

If you just wave them good-bye without thinking it through, you could hold a grudge against the boss. Take it out on someone else. Or just feel really crappy about yourself. You could also, if you are so inclined, go out and try and numb the pain after work.

Feelings are one of the most honest things we have. They deserve attention.

So, yes, sometimes, often times, in one ear and out the other does make sense.  But let it stop, take it in, don’t deny yourself your feelings and then if appropriate shove it out the other side.