I CHOSE NOT TO AGREE

This is our first guest blogger. It’s a very special blog on a very special day. Today is blogger Robert Levithan’s 62nd birthday.  When you read his inspiring story you will understand why this day is so very special.  Happy Birthday Bobby and many, many more!

In 1994 my life expectancy was two years,  My immune system had crashed..  I was 43 and had tested positive for HIV in 1984 (as part of a study—before the test was available to the general public).  I may have been positive since 1975.

My life with AIDS is somewhat unusual.  I am about to turn 62 and I’m in near perfect health.  Once upon a time this was deemed virtually impossible by the experts.  I chose not to agree.  Sometimes survival depends upon not being reasonable.

Not long after hospitalization for AIDS related pneumonia, in the Santa Fe AIDS writing group Write Action, I wrote a piece THE SONG OF THE UNLIKELY SURVIVOR.  It described my death as a very old man, as a veteran of that long ago battle, AIDS.  It was published as part of a collection of our work in 1995.  When a second volume was published in 1997, the editor, Joan Logghe, wrote in the introduction that when I read her that piece the first time, she thought “it was delusional.,”  but by 1997, with the advent of workable treatments (I won a lottery in 1995 for early access to the first workable ‘cocktail’—once again before the general public), it “may have been visionary.”  Similarly the work I was doing to create alternative emotional support for people living with AIDS in the 1980’s was often seen as part of the lunatic fringe.  Today, most of this work is mainstream:

What do I teach (most of it just common sense with a Eastern twist):  Regret is in the past.  Fear is in the future.  In the present I can manage whatever is actually happening.  Remember that the ‘mind is a run-on sentence’:  We need to put periods after the facts and the feelings, as they can be handled: Facts are real and feelings are a truth.  The rest is unmanageable and wastes our valuable resources.  Our resources are in the present

For me, resilience comes naturally.  I was raised to be what I’ve become:  A professional optimist.  Although, at times, it feels like my glass is overflowing, I embrace the reality that the proverbial glass is both half-empty AND half-full:  Life is exquisite and challenging, filled with love and loss, a mixed bag of experiences, all opportunities for growth and transformation. My family has experienced murder, suicide, overdose and illness and we go on.  There is so much to be grateful for and ultimately we trust in the process that is this life.

I consider myself fortunate and I have worked hard to maintain my physical, psychological and psychic equilibrium.  Living well is my full-time job.

I  now act as if this could be my last year on planet Earth–and as if I might also live to be 80 or 90.  The tension between the two keeps it interesting.  Why be reasonable? 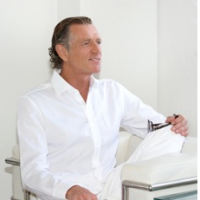 Robert Levithan is a psychotherapist, workshop leader and writer, practicing in New York City. His book, THE NEW 60: Outliving Yourself and Reinventing a Future is available on AMAZON. He is currently working on a memoir and is a regular contributor to the HUFFINGTON POST. Previously, Robert has been a columnist for Oprah’s O AT HOME as The Design Shrink and for OUT.com. and TheAdvocate.com. He has appeared on CHARLIE ROSE and FRESH AIR and is cited in numerous books and articles as a n expert on living with illness and aging. He is also a specialist on Internalized Prejudice. Robert was born on the island of Manhattan and has degrees from The University of Pennsylvania, and Southwestern College of Santa Fe, NM.