I BELIEVE IN BELIEF 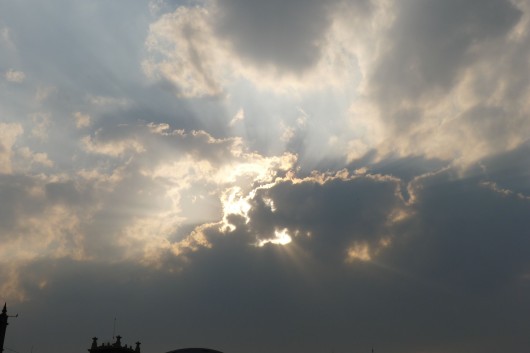 This week is the trifecta of Holy Days in the Judea Christian world.

We started with Monday and Tuesday being devoted to Passover, the holiest of holy holidays in the Jewish religion. And we end the week with Good Friday and Easter, the high holy days of Christianity.

Being somewhat of a spiritual mutt myself I celebrate everything.  I took off my cross, replaced it with my Hamsa and attended a Seder Monday evening.  I will do something to celebrate Easter, though I’m not sure what. Born a Jew, raised a Christian, I tend to nosh from the smorgasbord of most religions.

Here at Gratitude and Trust we encourage faith.  Faith in anything. We don’t care what it is.

Our second affirmation is ~

I Don’t Know How To Do This But Something Inside Me Does.

Which simply means, just go with something. Hand it over. If you do have an organized faith group you are a member of that is great. If you don’t, there is redemptive relief in being able to say – something outside of me knows more than I do. Someone, somewhere is watching over me. I am not alone in this. Whatever this is.

I can sum up my personal spiritual philosophy very succinctly – I believe in belief.

I’m not so crazy for fundamentalism, or trying to convert others.  But I believe in the power of belief. And nothing has quite the impact of collective belief. Thousands of hearts beating in spiritual harmony is a very powerful sound.

So whenever I travel I am drawn to Churches, Mosques, Temples, any house of worship where I can witness belief in action.

I just believe in believing.

Several weeks ago I was in Mexico City with my husband.  As always I sought out every Church I could.

We were there on a Sunday and made our way to Villa de Guadalupe. It is the holiest Roman Catholic Shrine in Latin America. And it also gets the most visitors of any  Catholic Church in the world outside of the Vatican.

It is the Catholic Church that is totally devoted to the Virgin Mary.

It is far from the prettiest religious complex I have ever seen. In fact the Nueva Basilica that was built in 1976 looks like something that might exist in Arkansas. But without question outside of India I have never been surrounded by so much pure religious veneration in one space. Two hundred and fifty thousand people go there on  a typical Sunday. I can only imagine how many will show up this Sunday to celebrate Easter.

It’s pulsating with faith, belief, sadness, poverty and exaltation. At one point I stood in the middle of the square and cried from the sheer power of all that love: The pure love and belief  these people have for the Virgin Mary.

Personally, that is not my belief. It is perhaps the biggest problem I have with embracing Christianity. But that is irrelevant – I believe in belief. And when I am enveloped by it, I let its power overwhelm me.

Whatever you believe – for many this your week.  Love. Pray. Cry. Laugh. Feast. Rejoice. And then take that feeling with you, try and bottle it up, or tuck it deep in your heart.  And then on those days when one is not celebrating major religious holidays you can draw on it.  Take a sip from your belief cup.  Draw on that belief for sustenance love, and strength.  Give back, Be grateful. Trust. Because belief in any form is just that – trust.

The old Basilica. People tend not to go now as it’s slopping as you can see. They ironically don’t believe t will not fall down. 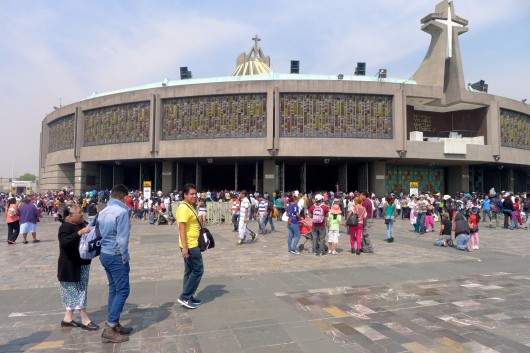 The newer structure that packs them in. It sits directly across from the older one.

There are the more traditional believers. 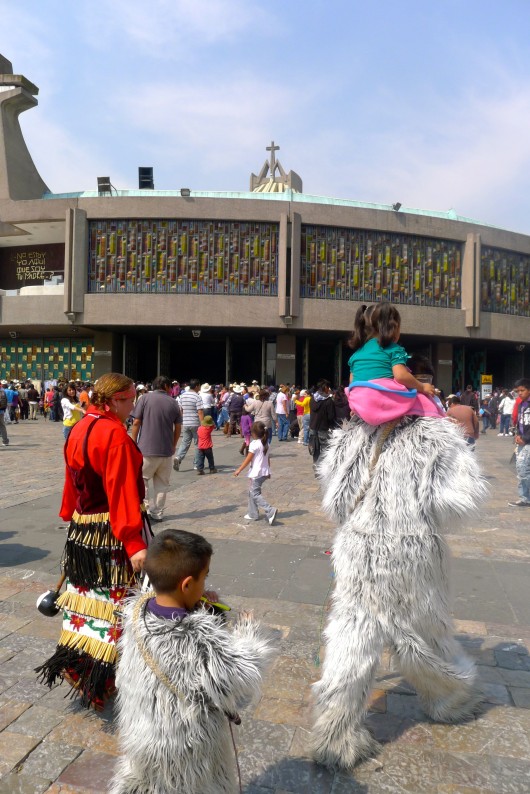 And those who believe bears have a unique power too. 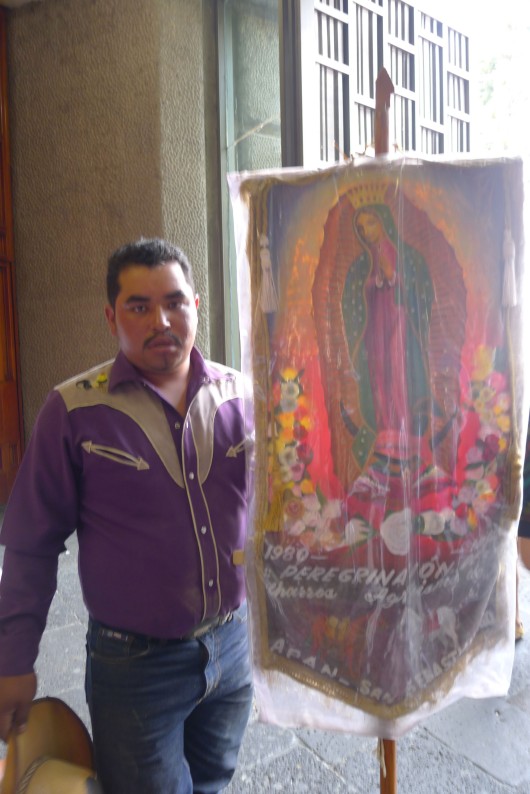 There are those who come from the mountains bridging their own symbols of their devotion to the Virgin Mary. 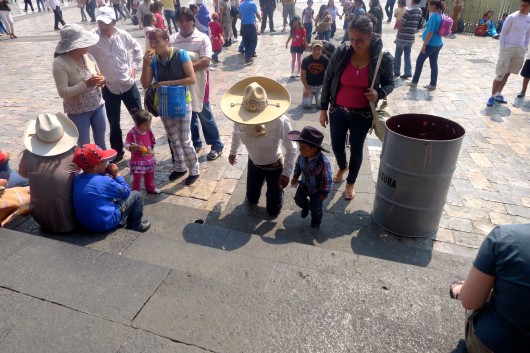 There are those who show their belief and devotion by walking on there knees in hopes their prayers will be answered sooner.

There is childhood belief. Or ways to get your kids to believe with you. 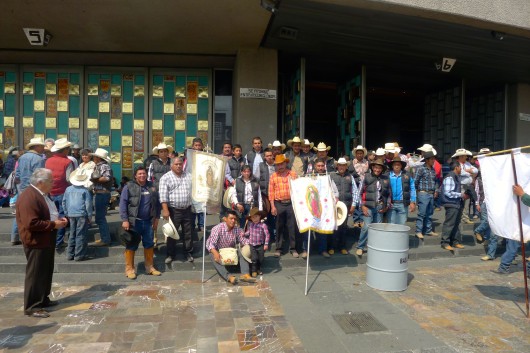 There are groups who come together all united in their belief. 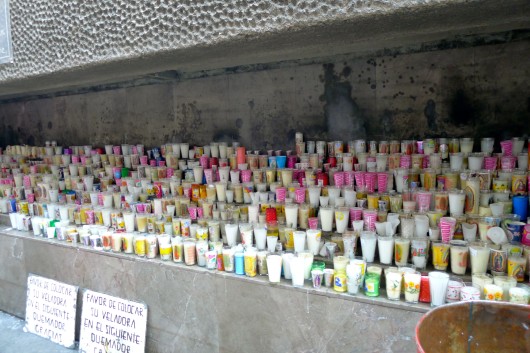 There are thousands of candles – the burning fire of belief. 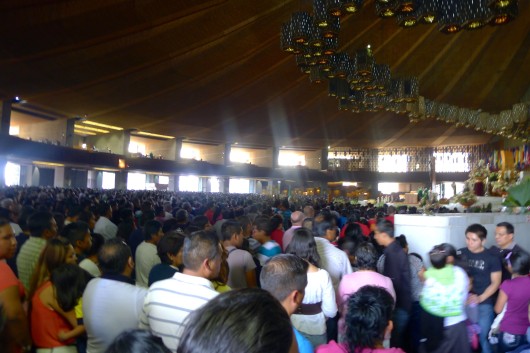 There are the tens of thousand packed into the new Church taking part in the service. 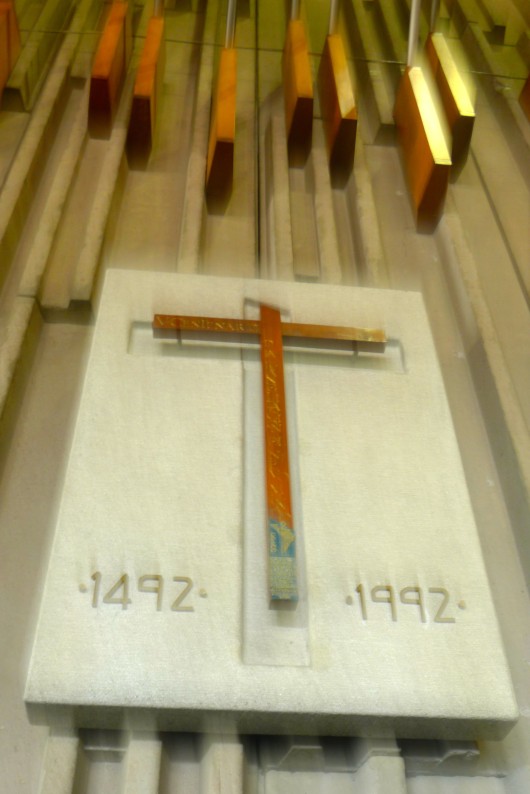 There is the symbol of the Cross, marked with the date that Columbus brought Christianity to this part of the world. 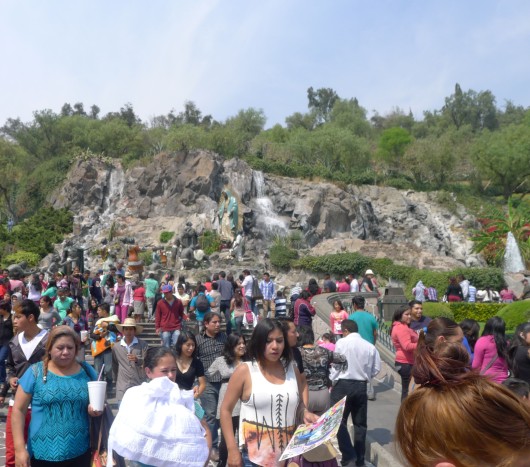 There are the thousands of people wandering around the grounds just basking in belief.

Dressed up and dancing to show their belief. 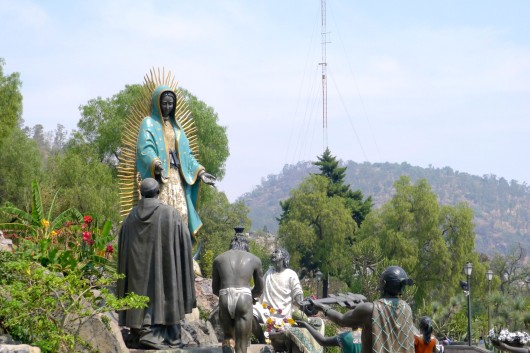 What the hundreds of millions of Catholics believe in – The Virgin Mary. This is who they come here to see.