DEVIL IN A WHITE DRESS 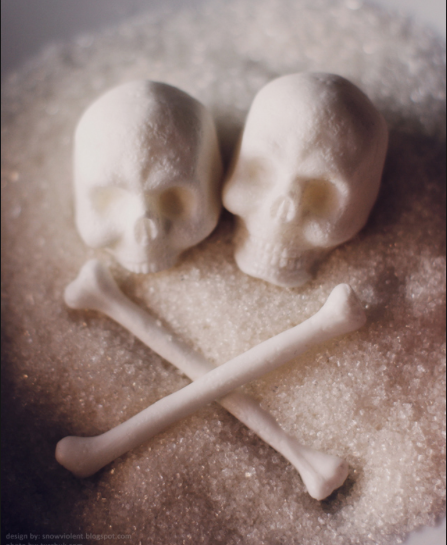 When one thinks of white powdery addictive substances the first thing that comes to mind is cocaine. And without question it fits the bill.

But it is far from most lethal, highly addictive, widely ingested white, powdery substance around.

That would be sugar.

Yes, the number one devil in a white dress is that sweet tasting, seemingly banal though highly addictive sugar, and its relatives, fructose, corn syrup and the rest of the sweeteners we seemingly cannot live without.

America’s sweetheart, who has a permanent invitation to most celebrations in the form of a cake and treats!  Yes. We treat ourself with our bodies number one enemy.

Sugar is America’s favorite pick me up.  Though the devil in a white dress is as cruel as an unreliable lover.  It delights you then drops you moments after it renders you euphoric

It is worshipped by children, snuck by dieters, dreamt about by those it holds in its sweet, sticky hands. People will hide it. Get in the car at two in the morning to find some.  Eat it alone and lie about it. Why? Because they are addicted to it.

Sugar is eight times more addictive than cocaine. And as we all know much cheaper and readily available.  Not to mention it is pretty much added to every processed food we eat.

The average American eats one hundred and fifty two pounds of sugar a  a year.

According to the National Survey on Drug Use and Health, in 2012 there were 1.6 million cocaine users over the age of 12. That boils down to  0.6% of the population. And stats show while it is still around cocaine use has been steadily declining. While sugar consumption only goes up and up. And Americans become fatter and fatter and sicker and sicker.

Nearly 26,000.000 children and adults have diabetes. Diabetes is caused by consuming too much sugar.  79,000,000 Americans have pre-diabetes.  1.9 million Americans are diagnosed with diabetes every year.

Thus nearly 10 % of the entire population has it.

An as many as one in three will have it in 2050 if the present trend continues.

Now, I am not underplaying drug use in anyway. It is deadly. It is rampant and it is widespread. But compared to sugar it  the numbers don’t compare.

And sugar kills too. The diseases that are linked to diabetes and obesity are pretty much the top ten of deadlies – from heart disease to cancer, high blood pressure, joint problems, and amputations.  Diabetic conditions costs the us 245 billion dollars a year.

So as you see sugar really is the devil in a white dress.

It’s not entirely our fault either.  As the food companies are protected by the government in both the amount of sugar they can put in things, the fact that they have kept hidden the dastardly reports on what sugar really does to us, and how much we should actually consume.

While we know how many grams of sugar might be in a given item, we really don’t know how much is good for us and how much tips the scales literally and metaphorically.

That is because the government has worked it out with the food manufacturers s that they will protect them.  Since if we did know we might start bypassing many of the foods that line the aisles of the supermarket.

All of you go into your kitchen right now, if you’re not home do it tonight and take a box of packaged food out of the cupboard, look at the percentage of your daily allowance of all additives in the item, then look at sugar and what do you see?  Never noticed that did you?

Sure there is personal responsibility.  We all know the benefits of exercise and eating our daily fruits and vegetables, but for some people the addiction is too great.  They need help to detox.

And like with booze some are more pre-disposed than others. Some are less affected by sugar. We all know those souls who can devour a pint of ice cream and follow it with a large coke and not gain an ounce.  Lucky ducks we always say. But truth is they are not so lucky as while sugar might not be showing up on their hips and thighs it is still wreaking havoc with their organs. Sugar is an equal opportunity killer. It can kill skinny people too.

We see the sugar addiction here and G and T.  We get many personal letters from people who are addicted to food.  We would never ever say who they are as we are hold our readers secrets.

But there are millions of you out there suffering from this addiction.

You get depressed you eat something  high in carbs and sugar. You feel momentarily better, though there is often guilt and shame attached.  And then like the cruel monster  sugar is it – it drops you on your head, so what do you do?  You eat some more.

Like with any other addiction, it is important to get yourself off of sugar. It does not mean that you will never eat another bite of your favorite dessert or only live on kale. But it does require vigilance in understanding your eating habits.  You need to look at your emotional relationship to food.

When did you first notice you were a sugar junkie?

Have you failed to notice?

Has your weight continued to add numbers as the years have progressed?

How much sugar do you consume each day?

Do you sneak it?

Swear off it only to find yourself devouring it?

And are you diabetic or at risk?

All of these are very important questions that you must ask yourself. And then it’s not enough to say,  “I will start a new regime next week, tomorrow, before summer.”  Those are not times.  They are dangling future moments. The time is now, before the devil in the white dress does something really nasty to your body and soul.

Thursday Dr. Sherry Pagoto diet and health expert is going to tell us how to wean ourselves off sugar and stay off once and for all.