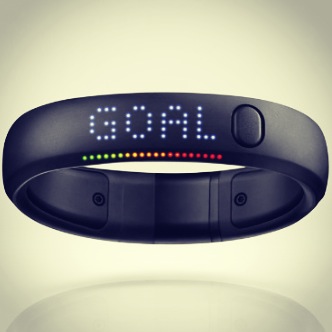 I sometimes write blogs for this site and post to my own site.  Today time I am doing the reverse. Paul and I are deep into deadline, so we might not be posting as many blogs for the next month. Bear with us.  But this blog belongs here because we are all about self-improvement.  One of of the biggest addictions people have is to food and sugar. One of their biggest problems is being sedentary and not working out. So  this blog is in the name of self-improvement. Setting goals. Reaching them. Never Giving Up!

BTW- Glenn is my husband.

You might have wondered what they were doing.  Had they suddenly found a mole that shrieked out melanoma?  Were they wearing some new fangled smart watch that they were testing for Google?  Chances are they were looking at their fitness trackers: The latest addition to the self-obsessed person’s accessory drawer.

Fitness trackers have been around for a few years but are all of a sudden really taking off.

I was flirting with one last year when my friend AJ Jacobs published his hilarious book DROP DEAD HEALTHY.  He was the first person I knew to wear one. BTW – AJ goes with the FitBit. But I quickly forgot about them. And then I saw an article in Fashionista about how they were now stylish.

So a week ago when Paul Williams and I had finished our writing for the day, I said let’s go to Nike and buy Fuel Bands.  He had no idea what I was talking about.  But anything that gets me away from the keyboard works for him, so off we went.
We picked up one for each of us, and one for Glenn too.

The second Paul strapped his on he was in love.  It gave him instant feedback, how many steps he takes, how many calories consumed, how much energy he burns up.

I was pretty smitten too. Though my first one was a lemon and I ended up making more trips to the Nike store in the first two days than I have made in my entire life.

The thing is very confusing until you get the hang of it. Like I thought it was broken because after I had been up for five hours and it registered only one hour.

The girl at the Nike store told me this was because you only “win” an hour when you move for five consecutive minutes. Hours are not given like in life, they are earned. Game changer…. Make Your Hours Count. Earn Them.

In the event you forget to move, every forty-five minutes the band says “Go Tracey.” In case you are not staring at it, the message appears on your phone. In fact as I was typing that sentence, mine said “GO TRACEY.”  Despite an hour at the gym this morning, I’ve only “won” four hours, as it’s nine degrees out and the band does not register snow days. The band only registers movement. It loves walking. It does not think much of Core Fusion. It likes running, but is not too responsive to weight lifting.

The calorie counter is wonky. IE – when the Exercycle says you have burned up 190 calories the band says 70.

This drove Glenn around the bend.  He had worked like a dog on the Stair Master– it told him he had burned 780 calories and the band said, 300.

This sent me back to the Nike store. “The calorie counter is off” I said.

“No, it does not register bikes and machines very well, you need to put it around your ankle, but the calories will still be less.”

Paul figured out if you shake your wrist like you’re doing the Hokey Pokey it registers quite a lot. Paul is the only one of us who has hit his goal each day. “That’s what it’s all about.”

The point is this – you set a goal for yourself, based on your age, weight and height. Mine is now 3500.  I need to accumulate 3500 fuel points by the end of the day and if I do, my band lights up like the Fourth of July and spells out Goal.  It is quite thrilling. I now live to see GOAL.

And you know what?  It works.

It is big brother. It is watching and you want to please it.

All three of us work out every day. Paul runs. Glenn hits the gym and I either go to the gym or ride the bike for forty-five minutes.

But truth be told, we don’t do a lot else.  The band pointed this out immediately.

Since we all started wearing them we have upped our activity – a lot.  And that is what big band wants. It wants you to take the stairs instead of the elevator – win the hour, rack up some fuel points. It wants you to walk and not take cabs or use the car.

And in order to please the band or to just see that GOAL, you move.

Before the deep freeze hit here yesterday I was hitting my goal daily.

Glenn’s was set too high. He would have had to be on the Olympic high jump team to meet it, so we lowered it.  But he never gave up.

Day before yesterday I walked 80 blocks and it was great! Little changes made all the difference. ,

Glenn and I took Ramu to the vet, normally we would have cabbed home, instead we walked 18 blocks. Won the hour. After dinner, we all walked home 22 blocks, cold night, never would have done it. But the band reminds you, you have not been moving enough yet. Go Tracey. Go Glenn. Go Paul

Paul and I usually send out for lunch when we are writing, or we might wander next door, but that is pretty much it. All week we walked somewhere. we made a point of it. We got up and went. One day we walked 30 blocks to and from lunch.

And then sometimes, despite the fact we look foolish we will dance around the office in the middle of the day when it reminds us to move. Glenn does not do this.

The point of all this is, your relationship to the band is very psychological.  Knowing the band knows you set the goal and the band is holding you to a standard, makes you get up and try and beat the band.  It is a reminder of how sedentary we can be. One hour of exercise a day is not enough. You need to move.

It can be annoying for those around you who are bandless, as much of the conversation suddenly revolves around, I’ve only got 1600 steps and one hour.  There is a lingua franca that takes over. It might make people who are not being tracked by big band feel left out. But then I say to them get with the program and get yourself a band. Or at least GO!

But you know what when he gets off that plane he will move.

And that’s what it’s all about!